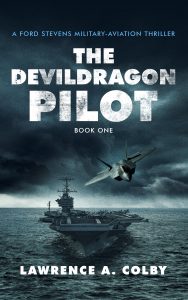 Citizen Airman/Feb. 2017 — About a year and a half ago, an Air Force Reserve colonel with a passion for reading started looking for a good work of fiction that featured a Citizen Airman as the hero. When he couldn’t find a book that fit the bill, he decided to do something about it: He wrote his own.

Here’s a brief look at what to expect from “The Devil Dragon Pilot,” taken from Colby’s website, colbyaviationthrillers.com: “Concealed deep within China’s inland borders is one of the most secretive airplanes ever own, known as Devil Dragon. She’s sleek, unbelievably fast and mysterious. Her test pilots have one mission in mind: make her test flights successful for operational use as soon as possible. Or sooner.

“But when strange transmissions of pilots are recorded without an aircraft appearing on radar and bizarre cell phone signals are detected at towers hundreds of miles apart, the intelligence community team is set in motion, and U.S. Air Force Reserve pilot Ford Stevens is asked to take on the most dangerous assignment of his life. …”

The book was released in electronic, print and audio formats in December.

“I had never written a book before, but I thought, ‘What the heck, let’s give it a shot,’” Colby said.

For about a year, the colonel got up early every morning and wrote a page or two of his novel before heading to work at the National Defense University’s Eisenhower School. There, Colby, who is on an active Guard and Reserve tour, is a faculty member in the Strategic Leadership Department and co-leader of the Health Care Industry Study Program.

“I found early mornings were the best time to grab a few minutes to write,” he said. “It’s amazing what you can get done in a year just writing a page or two at a time.”

Colby said he drew a lot from his own military experience in writing “The Devil Dragon Pilot.” He earned his commission from the Marine Corps in 1992 through the platoon leaders course in Quantico, Virginia, and served as an AH-1W Cobra helicopter pilot. He later completed an inter-service transfer to the Air Force Reserve and flight training as a C-130H3 Hercules pilot. While flying C-130s, he was assigned to the 914th Airlift Wing at Niagara Falls Air Reserve Station, New York, a wing that is featured prominently in his book. (The 914th is in the process of converting from C-130 Hercules to KC-135 Stratotanker aircraft.)

After leaving Niagara, Colby served at the Pentagon in the Office of the Secretary of Defense (Personnel and Readiness) and Reserve Affairs, serving as a military assistant to the undersecretary and assistant secretary. He was also in the Office of the Assistant Secretary of the Air Force (Manpower and Reserve Affairs) as an executive officer and staff officer in Force Management Integration.

The colonel said one of the best things about writing the book was the support he received from his family throughout the process.

“My wife was extremely supportive,” he said, “and I have two young sons who are self-proclaimed action-movie experts, and they were a big help. They would act out the fight scenes for me so I could get all of the details right. They also helped me come up with the ending for the book.”

He said one of the hardest things about writing the book was finding a good stopping point each morning when it was time to get ready for work or head out for a morning run.

“It was tough because I would get on a roll and want to keep writing,” said Colby, an avid marathoner who was training for races a majority of the time he was working on his first novel. “But I knew I had things to do, so I would have to shut it down for the morning.”

Another tough part of the process was the Department of Defense prepublication review required of all employees who want to try their hand at writing.

“The DOD review is very in-depth and extensive, so it took about six months to complete,” Colby said. “But I’m proud to say that the review has been completed, and the book is aligned with the DOD for fiction publications.”

Colby is also proud of the fact that a portion of the proceeds from his book will go to a trio of veteran-related charities: Birdies for the Brave, Team Rubicon Global and the Headstrong Project.

For people who check out “The Devil Dragon Pilot” and enjoy the book, there’s good news: Colby is still getting up at about 3:30 each morning and turning out a couple of pages before heading to work. He’s already well into writing the second Ford Stevens novel.

Thank you very much, Citizen Airman and Air Force Reserve!  Thank you!